​​"To produce a mighty book, you must choose a mighty theme" – Herman Melville

How Did I Decide to Write a Novel?

"I started writing Rhino while living in California. At that time, I was working with Warner Bros. Entertainment on a music video I had just produced and had spent the day editing the show. I arrived home in the evening and switched on TV.  Steve Martin’s movie “Dead Men Don’t Wear Plaid” was on, I had seen it, so I changed channels. Next was a documentary on Rhino poaching and after watching for a few minutes, the gravity of what I was seeing hit me and I said out loud; “Dead Rhinos Don’t Wear Horns." I paused and thought, "maybe I can do something about this, it's a great subject for a novel and movie." That coincidence set me on a journey that's lasted years.

"When I returned to Florida I was working full time and “all consumed” by my job. I had written about thirty pages of the novel and one day I started reading and decided to continue with the story.

I don’t know how other authors who have a fifty-hour a week job write but I did most of the work on weekends. I’d find myself on Saturday morning trying to decide if I was going to sit down and work on the book. It all depended on the writing muse visiting that morning. The “muse” is a little invisible entity that sits on the shoulders of writers and shouts in their ear, “write today!” Actually I really loved writing the novel and did my best to work on it as frequently as possible.

I judged a good six to eight-hour day’s work at completing a page, a page and a half was exceptional.  “Rhino” is over 100,000 words, 435-Word Document pages, so at the pace I was able to write, it took three years to complete. I'm certainly not complaining, writing a novel is a great experience and I’m hoping to write a sequel soon.

Although “Rhino” is a fictional action and adventure story, the underlying subject is very serious. There is a real need to protect all endangered animals. Over the years I've become more impassioned about the plight of the Rhino and just the other evening there was a news story on TV about the problem. The next day I read an article about Rhino poaching on a popular news site, so the issue is still very much in the news. I can only hope my novel helps increase awareness."

​Burton Horwitz has been widely published over the years in trade journals and industry newspapers. He is a pilot, motorcycle and exercise enthusiast and currently resides in Boca Raton, Florida.

rhino - a novel by burton Horwitz 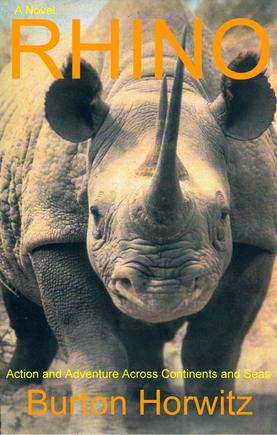