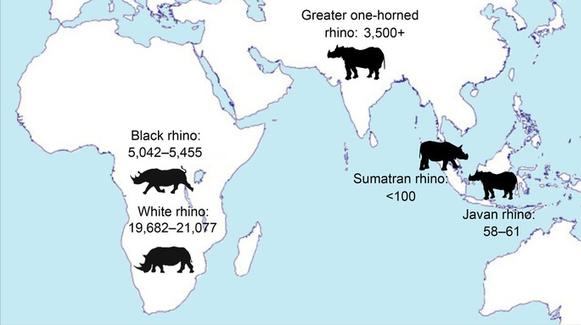 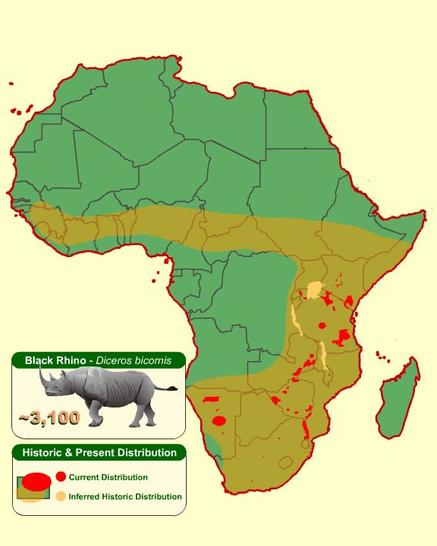 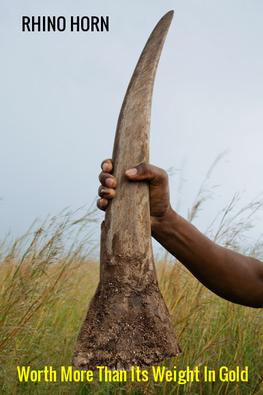 At the beginning of the 20th century there were 500,000 rhinos across Africa and Asia. This fell to 70,000 by 1970 and further to just 29,000 in the wild today. Despite this bleak picture, and the continuing threat of poaching for their valuable horns, global rhino population figures have been increasing in recent years.

Large-scale poaching of the now critically endangered black rhino resulted in a dramatic 96% decline from 65,000 individuals in 1970 to just 2,300 in 1993. Thanks to the persistent efforts of conservation programmes across Africa black rhino numbers have risen since the early 1990s to a current population of between 5,042 and 5,455 individuals.

The overwhelming rhino conservation success story is that of the southern white rhino. With numbers as low as 50 left in the wild in the early 1900s, this subspecies of rhino has now increased to between 19,682 and 21,077  and has become the most populous of all the rhino species. However the alarming increase in poaching since 2008 threatens to undermine the rhino conservation successes made in Africa over the last two decades.

In Asia the populations of Sumatran and Javan rhinos are extremely low and both species are listed as critically endangered. There are fewer than 100 Sumatran rhinos left in the wild, and efforts are now being invested in captive breeding in an attempt to boost the population.

The Javan story is sadly even more shocking with an estimated 58 to 61 individuals left in a single population in Ujung Kulon National Park. Local conservationists, supported by Save the Rhino, are working hard to increase the habitat for this species since it is believed that the current habitat cannot support any more rhinos, and Rhino Protection Units have been set up to monitor and protect both the remaining Javan and Sumatran  rhinos.

Reprinted Save the Rhino International, https://www.savetherhino.org/ 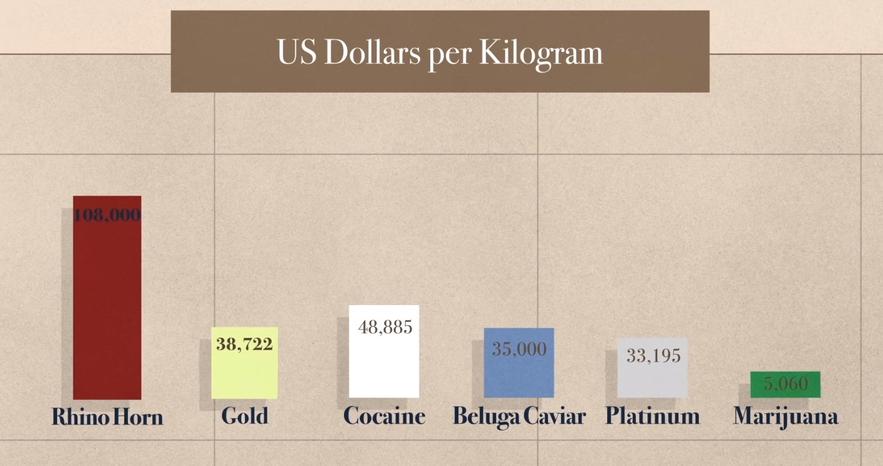 Rhinos once roamed throughout Europe, Asia and Africa, and were known to early Europeans who depicted them in cave paintings. Within historical times, they were still widespread across Africa's savannas and Asia's tropical forests. But today, very few rhinos survive outside protected areas. All five species are threatened, primarily by poaching.

​The booming illegal trade supplies mostly Vietnam and China, where rhino horn is often ground to a powder and ingested as a treatment for everything from cancer to sea snake bites and hangovers. Inspired by years of erroneous reporting by Western media, people have recently also been using rhino horn as an aphrodisiac. On the black market in South Africa, the horn of the white rhino sells for up to $3,000 a pound, according to Groenewald, but on Asian black markets it wholesales for five to 10 times that, and retail prices can go up astronomically from there. A single bull rhino carrying 22 pounds of horn might buy a new life for a Mozambican poacher who slips over the border into Kruger National Park with an AK-47, but that poacher himself is likely to be exploited by the men who supplied his weapon. That poacher also may be shot by authorities, as were 500 Mozambican poachers in Kruger from 2010 to 2015.

Threats: Although international trade in rhino horn has been banned under CITES (Convention on International Trade in Endangered Species of Fauna and Flora) since 1977, demand remains high, particularly in Vietnam – fueling rhino poaching in both Africa and Asia.

Powdered horn is used in traditional Asian medicine as a supposed cure for a range of illnesses – from hangovers to fevers and even cancer. There has been a huge surge in poaching since 2008, particulalry in South Africa, which has seen record numbers of rhinos poached in recent years, including 1215 in 2014 alone.

The current crisis has been primarily driven by the demand for horn by upper-middle class citizens in Vietnam. As well as its use in medicine, rhino horn is bought and consumed purely as a symbol of wealth. Poaching gangs use increasingly sophisticated methods to evade authorities – including helicopters and night vision equipment to track rhinos, and veterinary drugs to knock them out. This means governments and conservationists need to match this level of technology to be able to tackle the problem.

The unicorn is a legendary creature that has been described since antiquity as a beast with a large, pointed, spiraling horn projecting from its forehead. The unicorn was depicted in ancient seals of the Indus Valley Civilization and was mentioned by the ancient Greeks in accounts of natural history by various writers, including Ctesias, Strabo, Pliny the Younger. In European folklore, the unicorn is often depicted as a white horse-like or goat-like animal with a long horn and cloven hooves. The horn itself and the substance it was made of was called Alicorn, and it was believed that the horn holds magical and medicinal properties.

The Alicorn was thought to cure many diseases and have the ability to detect poisons, and many physicians would make "cures" and sell them. Cups were made from alicorn for kings and given as a gift; these were usually made of ivory or walrus ivory. Entire horns were very precious in the Middle Ages and were often really the tusks of Narwhals.

So . . . for the perpetuation of an ancient myth the Rhinoceros is killed for its horn by people who believe it has magic powers. 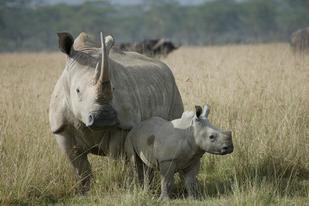 REPRINTED WITH PERMISSION OF THE WORLD WILDLIFE FUND. http://wwf.panda.org/